there are two of our most popular tours which will take you out of Siem Reap to an abandoned Angkorian capital (928-944 A.D.), Koh Ker. It is the Mayan-looking pyramid temple of Cambodia with other-smaller surrounding temples such as Prasat Pram, Prasat Bak, Prasat Damrei, Prasat Chrap. Beng Mealea temple.

We will begin our journey to Koh Ker very early in the morning. We will travel on National Road 6 to Koh Ker, located 120km from Siem Reap city. Koh Ker was briefly the capital of the Khmer Empire from 928 to 944 A.D during the reigns of kings Jayavarman IV and Harshavarman II. There are a few people living near the temple, and it is enclosed by the forest, so many tourists haven’t made the trip to Koh Ker. There are more than 180 temples in a preserved area of 81 square kilometres, but only 24 monuments are open to tourists since most of the sanctuaries are hidden in the jungle.

The main temple is called Prasat Thom or Prang, the seven-tiered pyramid built in 928 AD by king Jayavarman IV. The structure of the temple is very similar to the temples built by the Mayans in Mexico. Therefore, some people think they were built by aliens! Prasat Thom is a 55m-wide and 40m-high sandstone temple. Archaeologists believe that a large 4m lingam was placed on the top of the temple which would have weighed several tons. There is only one main stairway up to the top and it is very limited for visitors.

One of the fascinating views in Koh Ker archaeological site is Prasat Pram, a small five-tower temple made from brick. Two of the towers have been completely covered by fig trees and its root that cut through the brick like liquid mercury.

Another temple is Prasat Bak, a small square temple built of laterite that has one side measures only 5m. This temple is in a bad condition because some parts have collapsed. There used to be a statue of Ganesha, son of Shiva and Uma who has human body and an elephant’s head inside the sanctuary.

Prasat Damrei or Elephant Temple in English, a brick temple that still remain in good condition. It has four sides with ten-step staircase. Eight lions and four elephant statues once surrounded each side of the temple, but now there remains only one lion and two beautiful elephant sculptures.

The second largest construction at Koh Ker is Prasat Krahom or Red Temple in English, named for the red bricks that used to build the temple. Unfortunately, all carved lions in this temple were completely destroyed, but there are still many things to sea here such as the naga-flanked causeway, libraries, and galleries.

Then, we’ll continue our tour northeast to Beng Mealea temple that is about 50km from the Rolous Group. The history of the temple is not clear. Many archaeologists assume that this temple was built during the Angkor Wat period in the early 12th century because its style of architecture looks exactly the same as Angkor Wat. Thus, this temple was built during king Suryavarman II’s reign who also constructed Angkor Wat temple.

In 1992, Beng Mealea became a UNESCO World Heritage Site. It is known as “the sister of Angkor Wat” due to its identical design. The temple has collapsed because of the growth of trees and a long period of civil war. As a result, there are blocks of sandstones lying on the ground. Many tourists don’t make their way to Beng Mealea due to the distance. Thus, it becomes a mysterious and peaceful temple among many other temples in Siem Reap. 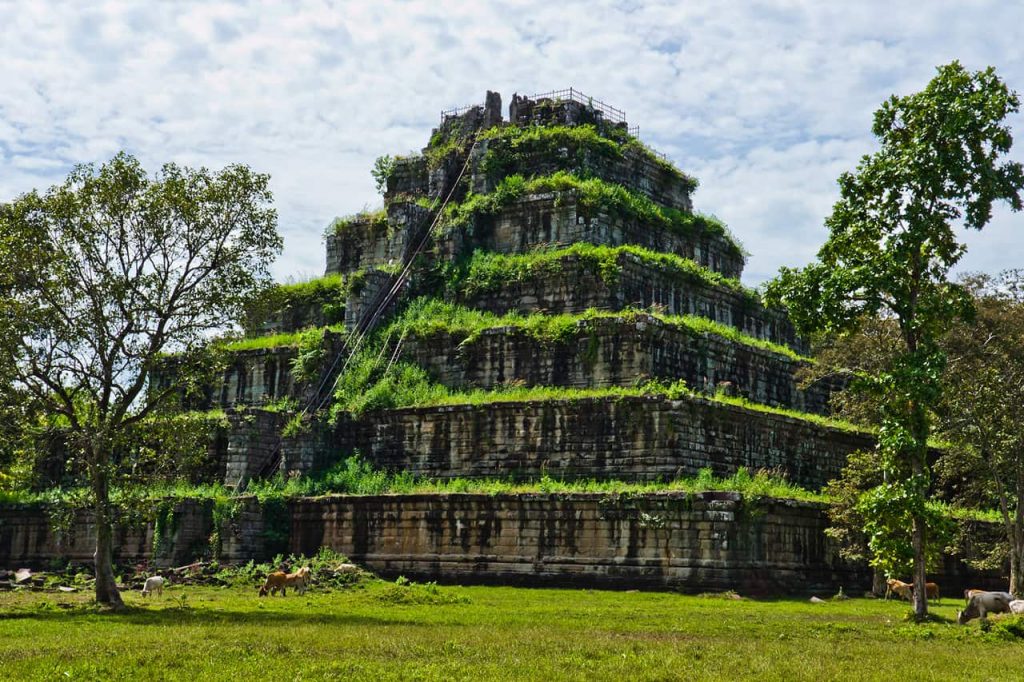